I grew something completely by accident

In early Spring of this year I noticed some leaves around the mailbox. They were actually around the water meter cover right next to the mailbox. I thought it was just some sort of weed, but I didn't pull it. Then some really pretty yellow flowers started growing. I still left it alone as I was curious. I looked one day and saw a round "thing". It was a tannish color and the size of an apple. It grew to the size of a small ball and my Father in Law thought it was a squash and was ready to be picked. I thought about how a squash could just start growing at the edge of our yard. The only thing I could come up with was that maybe the trash got spilled when the trash man did a pick up, but it still didn't seem like enough seeds would have been dropped.


I continued to let it grow and after awhile, figured out what it was and how it got there.


The leaves are gone now, and it has fallen off it's stem. 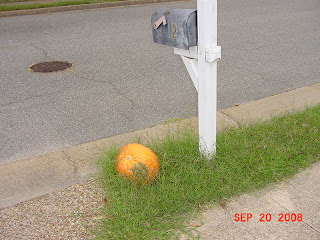 Last year one of the kids dropped a pumpkin off the porch and it split. It was still before Halloween so I put it on the meter cover (to get it to stand up). The seeds must've "planted" and we grew a pumpkin. I'm leaving it where it grew, and hope I can grow another next year.
Posted by Rachele Bennett at 11:14 AM