What are the odds?

Earlier this month in South Carolina, a truck driver for Frito Lay was traveling Northbound on highway 701 when he had to swerve to avoid colliding with the driver in front of him who was slowing to turn (following too close maybe?). So to avoid hitting the car, the driver swerved his car into the other lane, which happened to be the Southbound lane, and instead engaged in a head on collision with...another Frito Lay truck. What are the chances? Since they work for the same company, do they use the same South Carolina injury lawyer ? Or do they need separate ones?
Apparently no one was seriously injured, but I wonder if anyone got fired. 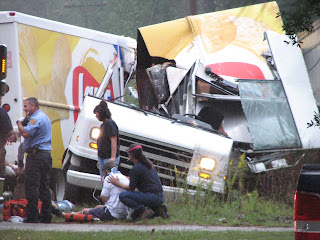 Posted by Rachele Bennett at 12:11 PM