I'm not a shoe collector. I know, huge gasps. I have shoes, obviously, but I'm not a connoisseur. I buy shoes when I need them. I think this stems from all my years working 50-60 hours a week in a restaurant. I went through shoes like mad, and refused to spend a lot on shoes that would just end up getting trashed with food and grease.

I do not work in a restaurant anymore, so...

I'm checking out shoes. I figure spending a little more on some nice shoes or boots (I really want boots) isn't that tragic since they will probably be with me the rest of my life. My step mom is highly upset that I can just pick a pair off the shelf, or order online, and never have a problem with fit. She has to special order shoes for her feet (read: boats).

I'm really in love with these Ralph Riding Boots by dani black shoes. I like them in Espresso, but they also come in black. They are fully leather lined and were featured in Self magazine. The coolest part is that they are currently 30% off. 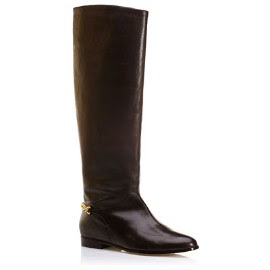 I think the last pair of boots I owned were Moon boots, I was probably 12. I despised those things. My parents took my little brother out to pick out some boots, and for some reason figured if they were good enough for him, I would love them too. NOT! I would put them on, only because I was not allowed to leave the house without them (even though there was no snow on the sidewalks or streets), I would take them off in the garage, put on my flats (no socks) and walk to the bus stop. When I got home I would put them on, stomp in the snow in the yard (for effect) and stomp my way into the house.

Posted by Rachele Bennett at 10:08 AM