This is the other news I was supposed to post about yesterday...I didn't...sorry.

Pink...Like the color is having a Crock Pot Challenge. Getting everyone to use their crock pots at least twice a week and sharing recipes. I knew I had to cook some NC BBQ this week to deliver to a friend who just had a baby (my Mom's group provides dinners for a week to the new moms in the group after the birth), so I would only have to come up with one more recipe.

As it turns out, Hubster also needs to have some BBQ ready for a thingy at work on Wednesday (same day I need mine). Thank goodness we were too lazy to return the duplicate crock pot we received 9.5 years ago as a wedding gift. He brought home 3 pork shoulders last night. His two are cooking now, and mine will go on tonight after he chops up his. He's going to kill me for sharing this recipe, but maybe he won't see this. Sorry Honey. It's for a good cause. 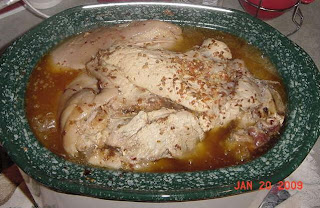 That's one of the shoulders that's been cooking over night.

For the sauce you'll need white (or apple cider) vinegar, crushed red pepper and Texas Pete. There are no specific amounts, mix the 3 together to the desired flavor.

Put 8-9 pound pork shoulder (or butt or picnic) in crock pot, pour in sauce mixture to fill pot about a third of the way, liberally cover pork with salt. (Hubster says pour until it's covered, and then add more) Let cook for 10 -12 hours on high. Turn off crock pot and let meat cool for about an hour. Take out shoulder and chop up, removing fat pieces and using a portion of remaining juices to moisten. (We like ours finely chopped, but you can cut or chop however you desire)

I like mine on a roll, with extra Texas Pete and Cole slaw...Yum!

Posted by Rachele Bennett at 7:10 AM