Puddin Pop and i ended up leaving for Michigan at 2:15 am Thursday morning. We were both excited and looking forward to seeing and playing in the snow. Just after the sun came up and we were in the hills of West Virginia, I happened to catch a glimpse of a rainbow out my window...and then it hit me...I left my camera at home! I pulled out my cell phone and knew it would have to do. So as I'm driving all these winding roads, I'm also trying to get a good shot of the rainbow (I wouldn't suggest this). After awhile it disappeared and I thought I had missed my chance, but just a few moments later it showed up again and this time we pulled over to the side of the road and I got PP out to witness this amazing site. We could see the entire rainbow from end to end. Of course my cell couldn't capture the whole thing, but it's something I won't soon forget and hopefully either will PP. 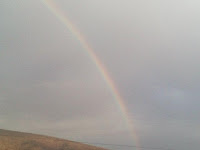 We had a good time travelling and PP was an absolute angel. She didn't complain, she slept. looked out the window and we chatted. I couldn't have expected more. We made decent time, avoided all traffic, and reached out destination just before 5pm...with one problem...There's NO SNOW! It's Michigan, they've had tons of snow this year, but not when we show up. It's more like "pull out the patio furniture and fire up the grill." I even had a friend comment on the winter jacket I brought. I haven't had the opportunity to wear it since we went tubing at Massenhutten in 2006. She said "Look at you in your ski coat, this is Spring weather for us."
It's officially been determined that I have been cursed and shall never see snow again. I just can't get a break.
Posted by Rachele Bennett at 7:37 AM