Have I mentioned that I'm a Michigan State fan? I am. I figure now is a good time to mention it. I, of course, wouldn't mention it if we weren't in the NCAA MENS B-BALL FINALS! Woo Hoo. It's a great day to be a Spartan.

I was raised on MSU athletics. My father was a season ticket holder for Basketball, Hockey and Football. We would spend our weekends with him attending one of these events and sometimes more. We would also attend the Great Lakes Invitational (hockey) tournament each year. Boy were there some memories made there. I usually met up with friends or brought one along. Good Times! I also attended Michigan State for a short while, leaving to pursue a career in Restaurant Management. Man, if I had that to do over again...I'd probably be practicing Law. Oh well.
So I had the kids dress for the game last night. It was a lot of fun sharing this event with my kids since it was such a large part of my childhood. I'll confess that I only watch during playoffs, but it's still exciting. Here's the kids celebrating out victory!! 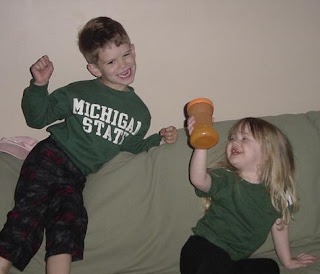 Posted by Rachele Bennett at 8:39 PM