Day at the Beach

We took the kids to the beach yesterday. 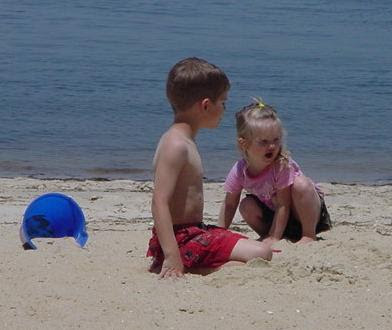 Considering Hubster has no fondness of the beach at all (he doesn't like the sand everywhere),we had a really good time and a ton of laughs...at least I was laughing.
When we first arrived parking was limited so Hubster dropped the kids and I and all our stuff off and went to park. While he was gone we had the time to set up camp and play in the water. Not only is he not fond of all the sand (because you bring it home with you and it gets in the car), he also made it clear to the kids that he WAS NOT going into the water. We had a picnic lunch, flew a kite, buried both kids in the sand, and relaxed in the sun. When the kids wanted to go back into the water, I took my chair down to the edge and sat so I could watch. Having already been in the water, I knew the kids could go out more than 15 feet and still be able to touch the bottom. Hubster did not know this.
Puddin Pop was just relaxing in the water when all of the sudden she said "Help, I'm sinking". Mind you, the kids play rescue all the time and this was not a voice of fear, but Hubster looked out and saw this 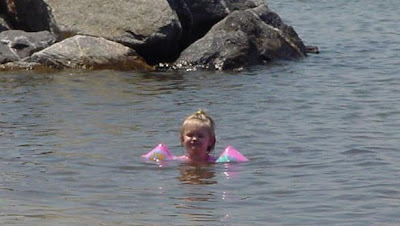 and he was off and running. I started to say "She's fine." but he was too quick to rescue her (and he was now in the water which I suspect was her plan). As he got closer to her... 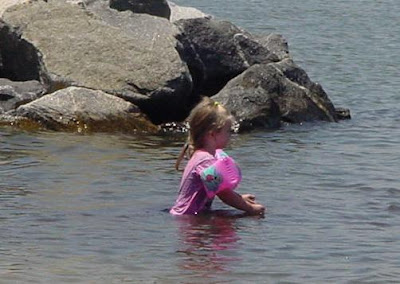 She stood up, causing me to bust out laughing at Daddy's attempted rescue and the realization that he'd been played...by a 3 year old.

Shortly after, a group of teenagers arrived at the beach and a couple of the girls walked into the water near where PP had resumed her floating. A couple of the boys in the group came running into the water to meet up with them and the girls, looking in PP's direction, shouted "Be careful, You're splashing the baby." PP stood up and looked behind her, seeing nothing she went back to floating. A few more minutes and a couple more of the teenagers decided to brave the water and ran in to meet their friends. Again the girls, looking in PP's direction, said "Watch out. You're splashing the baby." Again PP stood up and looked behind her (which is when I realized what was going on, but decided to watch and see how it played out). She saw nothing, and went back to floating. When the last of the group came into the water the girls again shouted their warning and the entire group looked at PP. She stood up, looked behind her, and assuming the girls were talking to her instead of about her said " What baby? I don't see any baby." Which gave the whole group a little chuckle, and me one too.
Posted by Rachele Bennett at 11:20 AM

Email ThisBlogThis!Share to TwitterShare to FacebookShare to Pinterest
Labels: day at the beach, family fun, kids at play