I Hate When He's Right

Boogie gave me a nice envelope of pictures and crafts that he made at school for Mother's day. Included was a fill-in-the-blank "All About Mom" form that the teacher helped him fill out. She asked the questions and then wrote in the answers. 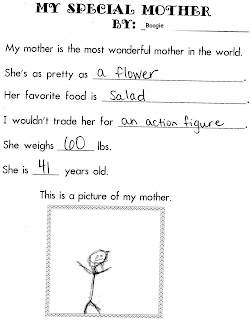 Now, I am thrilled that he believes that I am pretty as a flower, and love that he wouldn't trade me for an action figure. The problem I have is the age question. I hate it that he's right. I hate it even more that he is only right because darling Hubster decided on my last birthday to divulge the truth. See, I had already told Boog last year that I was 25. He knew that it was a "big" birthday, so when he asked point blank, I lied. He was pretty sure, since he can count, that on my last birthday (February) that I was turning 26, but for some reason Hubster decided he deserved the truth. So there it is, for the world to see. 26 would have gone nicely with my 60 pound frame... that I achieve from eating all those salads.

With all these projects that the kids do at home and school, I was thinking of getting them each their own custom rubber stamps . That way they can just stamp their name on projects so we will know who's is who's when we pull them out of boxes 20 years from now. This one is definitely sticking around for the future when he would rather have an action figure instead of mom.

Posted by Rachele Bennett at 11:31 AM