Best Dinner in a LONG Time

I ventured off the beaten path yesterday. I was in the mood to cook and decided to try a recipe that none of us had tried before. It was a little adventurous for my non- flavor seeking boys (hubby and Son). It was kinda like putting Ferrari parts on the Camry. A little fancier, way risky, and probably NOT a good fit...but I was tired of the same 'ol choices. I wanted FLAVOR. Both boys are doing much better in trying new things and I just hoped that my timing was right.

I pulled out a cook book and found a recipe for Chipotle-Cinnamon Pork Cops with Pineapple relish. I then looked for a side dish and found Nutty Okra. Now. Everyone here eats pork chops and okra, so I figured I could pull it off.

The recipe claims "less than 15 minutes prep" per recipe. I'm betting Mr. Food never made dinner while doing homework and occupying a 3 year old. It took a little longer. I added to it some Uncle Ben's Long Grain Wild rice in Sundried Tomato Florentine flavor. Not sure if that's new or something I've been missing out on...it was super yummy and complimented the chops and okra perfectly. At least Puddin Pop and I thought so. As dinner was almost finished I happened to get a small tasted of the rub on the chops and quickly whipped up some mac 'n cheese thinking the chops may be too spicy for the little folks.

I was very pleased with my meal. The kids tried the pork chops, one thought it was too spicy (it was pretty hot) and the other ate half of one. They loved the okra. They had the pineapple relish, mac n' cheese and one had rice. Hubster, who is affectionately called "bland boy" ate two pork chops, tried the rice, loved the okra and the pineapple (which really helped "cool" the pork chops.

It turned out to be a nice family dinner. We ate (mostly) the same thing. We tried something new...together. I got to cook. I got the flavorful food I've been missing at most of our family meals. 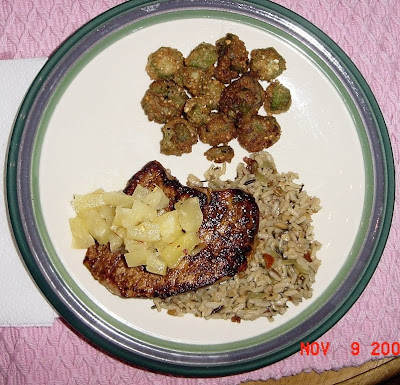 2) Combine pineapple and remaining ingredients. Toss well and set aside.

3) Heat remaining 1 tbsp of oil in a large non-stick skillet over medium heat. Add chops and cook 7-8 minutes on each side or until done. Serve with relish
4 servings

*Recipes from The Best of Mr. Food, 15-Minute Recipes

Posted by Rachele Bennett at 7:37 AM