I'm off my game. I'm not sure what happened. Usually our GNI evenings are well organized and go off without a hitch. I don't know if it was because there were only three of us. or because a printed menu wasn't distributed, I just felt the whole week like I was going to miss (forget) something. Fortunately, I remembered to purchase everything, I just forgot to take them all over and had to run back home...twice. It's only 3 doors down, but I felt like I earned my meal after sprinting back and forth. Then I forgot to take pictures. We scraped together some food as we were doing the dishes, but dessert was history. The night was still a blast. I'm only telling you because the pictures don;t do the meal justice.

We started with a glass of wine. Thanks to Alex and Friends at Turning Leaf for providing us with a sampling. I decided to go with the 2008 Cabernet and will save the Merlot for another day. Becky enjoyed the Chardonnay and Kathy, our White Zin drinker, brought her own. The Cabernet was perfect with our Steak and Shrimp Fondue and complimented the salad as well. I'm usually a Merlot fan but have been hearing more and more great things about Cabernet, so I wanted to give it another chance. This Turning Leaf did not disappoint. 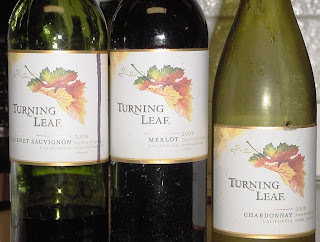 Harvest Notes:
The 2008 season finished with a warm October allowing the grapes to fully ripen on the
vine producing a Cabernet Sauvignon with exceptional richness and a smooth finish
just in time for our new 2008 vintage.

Tasting Notes:
Supple with aromas of black cherries and boysenberry jam. Notes of vanilla and brown
spice complement the dark fruit on the palate, resulting in a rich and lingering finish.

We sipped our wine while tinkering around the kitchen putting the salad together and setting up the fondue pot and unwrapping the meat, shrimp, and sauce. The salad was a combination of mixed greens, blueberries, toasted walnuts, and bleu cheese crumbles tossed in a raspberry walnut vinaigrette. We followed that (or more like intermingled) with ribeye steak and shrimp we cooked to desired doneness in oil. 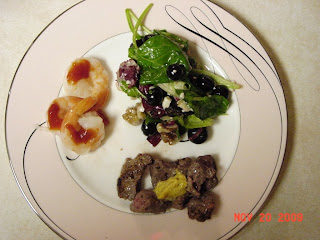 Dessert was lemon pound cake and fresh-from-the-oven brownies dipped in melted chocolate. I actually think I may have been on the verge of a sugar coma. It was SO good.

We haven't actually planned January's menu yet. We're taking December off for the Holidays and instead I will bring you recipes from a cookie swap on December 12th.

I'm thinking we should take our show on the road. A new sort of reality show. You watch from your plasma tvs as we celebrate food and beverages that are easy to create, all while enjoying the company of good friends. Okay. Maybe not too exciting. There is very little drama. I do usually knock over a glass each month, but that is hardly worth mentioning since I haven't broken anything...yet. It's just moms talking about life and kids and husbands and jobs and food and WHATEVER.

Posted by Rachele Bennett at 1:43 PM