Walgreens, I'm a Little Disappointed in You

I'm not in any way trying to get anyone to ban Walgreen's. I don't have anything against them. I've used them in the past for photo copies and collage prints. Overall, I think they do an awesome job. I just want to share a recent experience, so maybe I can help you avoid the same situation.

I don't print a lot of photos. I save them to flash drives. I'm going to do a video scrap book, or maybe several Cd's. Right now they are saved. When I do want copies, I usually print from one of my three home printers. I'm currently putting together a gift box for my parents and on of the things I'm including is a 5x7 of each kid. I have Boogs school picture and to have them from close to the same time, I decided to use a picture I took of Puddin Pop just before Halloween. In going to print it I realize that all 3 printers are low or out of one or more cartridges. Instead of figuring out which ones I need, I figure it would just be cheaper to have Walgreen's print it. Everything else they've done for me has been great and I knew I could get it fast. Here is the picture I uploaded to their site 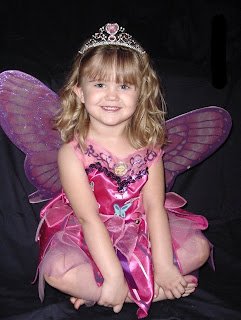 I love this picture. A friend had given me the idea to put a sheet over the couch to create a backdrop. That's where the problem begins. While the picture turned out well, the backdrop caused some issues.

I received an e-mail that the pic was ready, less than 2 hours after uploading (I had requested it for the following day), that was a bonus. When I arrived after work on Saturday to pick it up, the young girl at the counter asked my if I had a copyright release form. "I'm sorry?" I said. Apparently the backdrop is a red flag to them that it is a professional photo and they require a release form from the photographer allowing it to be printed. I chuckled and explained that the so-called backdrop was actually a sheet over my couch. She didn't look amused. She explained that she would have to pay a $10,000 fine if she released the photo. I thanked her for the compliment and said I would surely fill out her release form. She said I had to provide the form. What? "You need a release form but you don't have release forms?" I was assured that it was my responsibility and she couldn't do anything else to help me. I left...without my picture.

When I got home I put a message out on Facebook to inquire if any of my friends had a release form. Apparently I'm not the first to have this happen. One person told me to talk to a manager, one person told me if I still had the picture on my camera (which I didn't) that they would do it. My neighbor actually brought me a CD with the copyright release on it. I was going to print the form, but then realized my ink situation. I sulked for 4 days and finally went back today. I explained to another young girl my situation, assured her that I had taken the picture and asked if there was any way she could help. She said as long as I was willing to fill out a release, she could give it to me. I then told her I didn't have a release form. She got me one. She said that they really aren't supposed to do that, but she did. I'd mention her name to publicly thank her, but I wouldn't want to get her in trouble. I appreciate her going the extra mile to get me my picture.

I want to say again that I am in no way telling anyone NOT to use Walgreen's for their printing needs. They actually have some of the best prices on picture gifts, graduation announcements,
picture cards and photo calendars. Use them, just be careful of using backdrops to create Look-a-like professional photos. If you do use a backdrop, here's a release form you can use if you find yourself in the same situation.