(Not So) Wordless. Basket Sledding 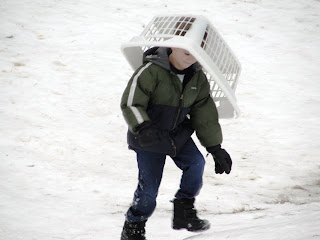 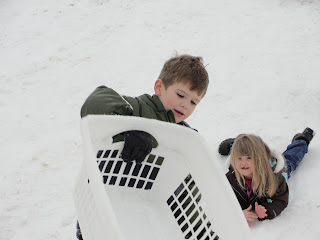 The snow is still here. I think by tomorrow it will be gone. I think the kids will also be going back to school tomorrow. They haven't been since Thursday. It's been a nice impromptu vacation and the snow gave us plenty to do. Yesterday I took the kids sledding. 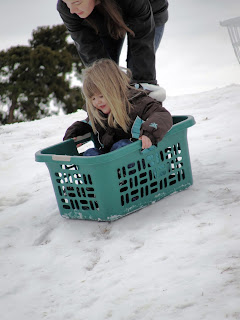 Yep. We are not the proud owners of sleds. Instead we heard that laundry baskets worked well. That green one, the larger of the two, proved to be a little slow, which was just the way Puddin Pop liked to go down the hill, Boog preferred the smaller-but-faster white one. I'll admit it. I went down the hill. The green basket wouldn't budge with me in it but the white one worked very well. Getting in and out was quite the scene, I'm sure. I'm also pretending there were no witnesses.
Next time we need to find a bigger hill. Or maybe I'll take the kids to Michigan and the hill I used to sled on. We called it The Angel. Or The Flying Angel for those brave enough to take the part of the hill with the big "jump". I'll check out life insurance online quotes and secure a policy before doing that in this old body. But after that's taken care of, it's game on. I'll even make sure we have proper sleds.
Posted by Rachele Bennett at 7:02 PM