I'm still in the process of viewing older posts and thought this one deserved another run. Since this posting, Colonel and Dash have gotten together and their "parents" have met. I feel happy that I helped in getting them together. I'm off to check out some tazorac reviews in the hope that I can find something that finally works. Any suggestions? 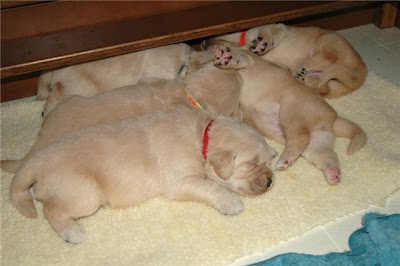 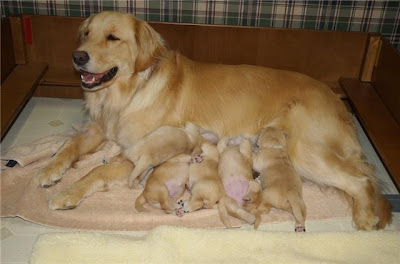 How cool is this?

I posted a while back about my Step Mom's dog Colonel. He is an assist dog that was bred and trained by Paws with a Cause to help her in her day to day life with Multiple Sclerosis. I had the opportunity to meet Colonel on my last visit home and had posted about how amazing this dog is and how much he helps WSM (wicked step mother, her name of choice). Through the power of the Internet, WSM now has these pictures and more of her baby colonel...when he was a baby.
In the first picture Colonel is the pup in the red collar. The second is of his mother, Dash, and his entire litter. Here's how I came to receive these:

WSM wrote a letter to all her contributors that helped her get Colonel and sent a copy to Paws. They asked if they could publish it in their quarterly News Letter and she said yes. A couple living not far from them who also participates in the Paws program saw the letter and decided to do an Internet search to see if they could get more info about the new owners of their dog's pup...and found the post I had done here. They e-mailed me with the pics above and explained that their dog, Dash, was originally being trained as an assist dog but they (the trainers at Paws) determined that she had a strong heart and good hips so they pulled her from the assist program and she joined Paws' breeding program. She is bred each year and the top pups are returned to Paws to be trained as assist dogs. Colonel was Dash's first pup put back into the program.

I was glad to be involved in getting WSM baby pictures of Colonel. She is now contacting Dash's owners to see if they can all get together.

Email ThisBlogThis!Share to TwitterShare to FacebookShare to Pinterest
Labels: assist dogs, Colonel, multiple sclerosis, Paws for a Cause, reposting