Snack-nics, Enchanted Journey, and a sick kid. It must be Random Tuesday

It's Tuesday. That means I get to unload a bunch of random thoughts and you have to listen...or read. There's a bunch of stuff floating around in my head today. You've been warned.

I work one day a week. One. In that time (this week) my 6 year old figured out how to use pictochat (on his DS) and somehow ended up with a Valentines date with the neighbor girl. I've been given conflicting information but what I gather is she invited him over and he accepted but decided he wanted to have it at our house. It was a picnic set for 3:00 so they decided it was a snack-nic. How cute. He woke up at 7:00 and the first thing he said was "How long until my snack-nic?" This went on all day. Constantly watching the clock. Constantly looking to see if his date was even home. If this is any indication of how his dates are going to go when the are real...I'm outta here. Or he'll have to wait and date after he moves out.

Puddin Pop is feeling ill today. She has a fever and is vomiting. She also has ballet and a birthday party. Poor thing insists she is fine and "can make it." I don't have the heart, yet, to tell her she won't be able to go. I've explained that she should stay home so as not to get her friends sick. I'm hoping she can make the decision to stay home on her own, or is sleeping when it's time to go. Any mention of missing dance class and she falls to pieces. Poor thing.

So I'm trying to lose some weight. I'm using my Wii Fit Plus 3-4 times a week and for an hour each time. I also just started Weight Watchers...sort of. I'm not attending meeting or reporting to anyone other than myself. I have awesome friends and one of them sent me all her stuff from when she used it. How cool is that? I've also decided that the best weight loss supplement is busy hands. If my hands are both occupied, they can't be stuffing snacks in my mouth. My new diversion is this... 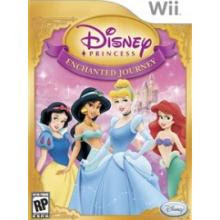 I bought this for Puddin Pop for Valentine's day. Who doesn't want to be a Princess with a magic wand? It uses both the wii-mote and the nun-chuck thus occupying both hands. It has a two player option but PP always wants to go the opposite way. I'm trying to help all the Disney Princesses after she goes to bed. Shhh. Don't tell. She's actually better at it than I am. Don't tell her that either.

That's it. All my random rants. What do you have swimming in your head? Head over to The Un-Mom and spill your mind.

Posted by Rachele Bennett at 8:19 AM

Email ThisBlogThis!Share to TwitterShare to FacebookShare to Pinterest
Labels: my 6 year old had a date for Valentine's day, Weight Watchers, wii enchanted journey