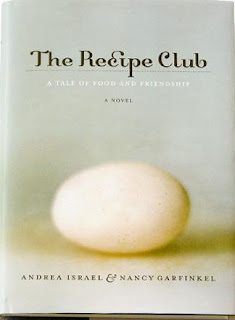 I just finished reading the Recipe Club and it was truly a book I didn't want to put down. Written by Andrea Israel and Nancy Garfinkel, it is mostly comprised of letters written between two unlikely friends. Letters ranging from the time they were in breeches in grade school until they are middle-aged.

Brought together by their parents, Lilly and Valerie share everything. Attending different schools and being so vastly different as people, they managed to create a friendship that would stand the test of time. Opposites in almost every way, these young girls come of age in the 70's and have all the freedoms that that era was known for. One sets of to college as her life long dream. The other is forced into college by a father who doesn't understand or appreciate her other talents. They maintain a (sometimes strained) friendship and through it all share their innermost fears and triumphs.

At an early age the girls started to trade recipes. Each one is named after an event or emotion that they are living at the time of writing. Recipes such as Conspiracy Apple Pie, Wash-Away-The-Blues Berry Cobbler, Home-of-my-Own Hamburgers and Missing You Warmly Lentil Salad are scattered throughout the book as part of the girls attempt at an exclusive recipe club.

I was sent a copy of The Recipe Club by Andrea Israel and Nancy Garfinkel. While I was sent the book at no cost, I am not being paid for this review and all opinions are my own.

Posted by Rachele Bennett at 1:06 PM