Yes Virginia, We Have Snow 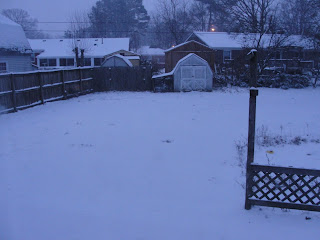 This is our backyard early Saturday morning. We got snow throughout the day Saturday and it's still on the ground this morning...two days later. I was trying to remember the last good snow we had, that stayed longer than 20 minutes. It was 2003.

I remember this because Boog was 5 months old. We had moved into our house the first week in July and he was born on the 29th. When purchasing our home we had dropped our renter's insurance and bought home owners insurance from the same company we had our car insurance with. In the midst of the move, the mommy brain, and adjusting to life with a newborn, I had overlooked the fact that we had not received a bill from our insurance company. We were on the pay 3 months/off 3 months plan so it never crossed my mind...until that December when we received a letter from DMV that our cars were un-insured. Needless to say I was pissed. I refused to ever use that company again. Yes. I should have realized we weren't getting bills, but they should have changed our mailing address. I have no idea why the bills weren't coming to us. We had done a change of address with the USPS so I'm thinking the insurance company screwed something up. While researching alternate auto insurance quotes, we got snow dumped on us. I remember waking up and thinking, "There is no way we are taking this baby out in an uninsured car. Funny how that works, isn't it? We had insurance before we left for work that morning. Desperate times call for desperate measures. We didn't get the best deal until months later.

So. This is the first good snow the kids have seen and they are having a ball playing in it. It also helps that it was already a planned no school day today.

Hot chocolate and cake for breakfast after an hour in the snow. Life doesn't get much better than that!
Posted by Rachele Bennett at 9:11 AM