Got up at 5am yesterday morning and drove to Raleigh. Day Light Savings sucks. My brother's surgery was postponed from last week to this week and he feels like dirt. To repair two herniated discs in his neck they went through the front. They had to move all the parts in the middle out of the way to get to his spine. Not sure how that makes it easier but it does make for a pretty cool scar. 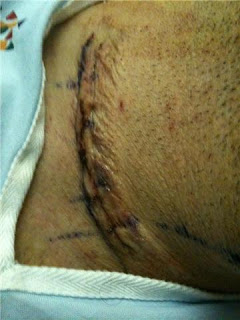 I haven't seen a cut like that since a boy I knew skated over the throat of another boy I knew. Makes him look tough, right? That's what I keep telling him.

Hubster is losing his mind, literally. He can't remember anything lately and I hope the doctor's get it figured out 'cuz he's about to make me go mad.

Doctor's can now use a spirometer to quickly check the "lung age" of their patients who smoke. Really? As if getting old isn't enough you now want us to know the age of our internal organs? I'll pass.


We always pre-mix our salads for Girls Night In. Why does it taste so much better that way? I can't eat my salads any other way now.

Both kids had some sort of stomach virus on Friday night. It lasted long enough to keep us parents up but had no lingering affects on them. They were up and ready to play at 6:30. It left me contemplating anything I put into my mouth. Imagining it coming back. I ate very little.

When I was in Junior High (We didn't have middle school.) Someone (I have no idea who) made me believe it would be a good idea to high jump. I sucked. One girl on the track team was REALLY good and no one else wanted to do it. I said "sure". While I was awful at the sport, I assure you I never did this.

Now click the button above and Head over to The Un Mom to read more random posts.

Posted by Rachele Bennett at 8:24 PM