Wow. Where have I been?

We took the kids to see Shrek Forever After 3D last night. Friday is always pizza and movie night but we decided to celebrate Daddy's new job with a "New Release" at the theater. It was Puddin Pop's first time watching in the theater. The movie was good. Fiona Rocked her Warrior side, Shrek and Donkey were their usual selves and Puss'n Boots was caught without his protective clothing, all soft and chubby. The story line taught a clear message which is always good. I was most in awe of the 3D. Even the previews were in 3D and I'm not sure what rock I've been hiding under. 3D Rocks. We watched Coraline in 3D, at home, it just wasn't the same.

Last week we received this gift pack from Activision and MomCentral. 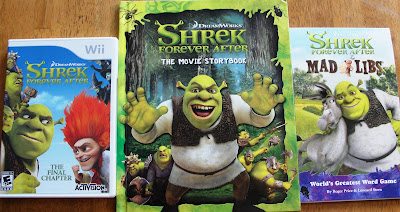 I love Shrek. A storybook, Mad Libs and the new Shrek Forever After game for the Wii. Puddin Pop claimed the book, which is delightfully illustrated, Handsome snagged the Mad Libs, which were one of my favorites as a kid, and we grabbed the Wii controllers to sit and play the game. Rated Everyone 10+ (for the fight scenes) we felt comfortable allowing both kids (4 and 6) to play the game with an adult...just in case.

We had been playing the game all week. There are battles with witches and pumpkins but it's mild violence and nothing graphic. I know some people would be bothered by this for young kids but I'm of the belief that if we play together and Hubster and I are explaining what our expectations are pertaining to this behavior it becomes a learning activity as well as some good family fun.

Shrek Forever After encourages team play. Similar to the Lego series of games, different characters have different talents and all must participate to get the job done. We played this in pairs for two reasons. 1) We only have two nunchucks. 2) Handsome really like to be where the action is. Playing with only two people allows for one-on-one time as well as gives him the opportunity to change to whichever character is needed to get the task done. We will probably be adding the extra two nunchucks to our accessories to be able to all play together. I hope the family play without the ability to change characters during play will prove to be a beneficial bonding time, especially for my two highly competitive (with each other) children.

It was fun to see the Movie after playing the game for a while. Both kids recognized different parts from the game. It was fun to see them recognize and put together the different parts of the storyline. We've now officially seen all the Shrek movies and are a little sad there will be no more. At least we have the game to continue the adventure. The book to remind us of one of our favorite characters, and the Mad Libs to create our own stories.


I wrote this review while participating in a blog tour campaign by Mom Central on behalf of Activision and received the items necessary to facilitate my review. In addition, Mom Central sent me a gift card to thank me for taking the time to participate.

Posted by Rachele Bennett at 2:43 PM