Last week I took the kids to the beach. I've been bragging ever since about all the work that's been done to this particular beach since last year. They've really cleaned it up. Large rock walls have been put in to block waves for little kid friendly spots to have fun in. 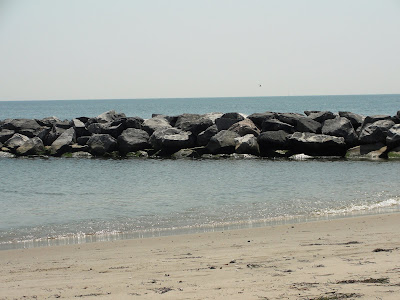 Friday night I convinced our neighbors to join us for a day at the beach. The hesitantly accepted.

We got to the beach around 9:30 to get our pick of spots before the crowds showed up. This also allows for close parking which makes the dragging of all the "stuff" tolerable. Especially on the way out when everyone is tired and kids no longer want to help.

I really could have used some super powers. Not the leaping steel buildings kind. The kind that can repel these... 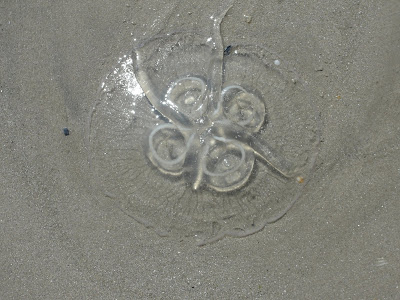 The beach was covered with them. Last week we saw a few little parts but nothing like this. It freaked me out a little. Then I walked into the water and saw this... 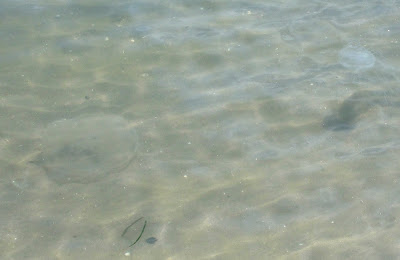 I got close enough to get this.. 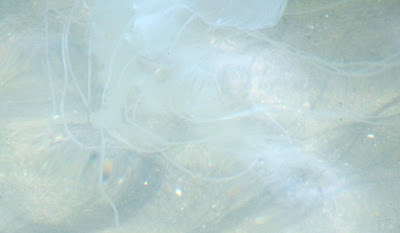 ...and then I got the heck out of the water. I'm ashamed to admit that the kids weren't afraid to get in the water...I wasn't so brave. My superpowers eluded me. I was a mere mortal mom.. far from the shore.

Once all the kids had claimed to be stung, one screaming and the others barely mentioning it (which I suspect means something rubbed up against them but probably didn't sting them), we decided to have a different kind of fun. Again us moms sat on the sidelines while the kids and dads did this... 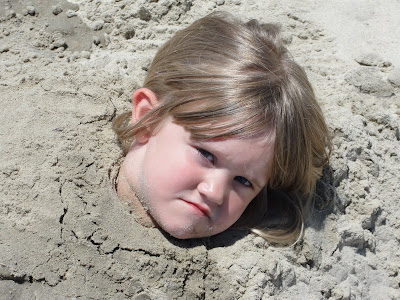 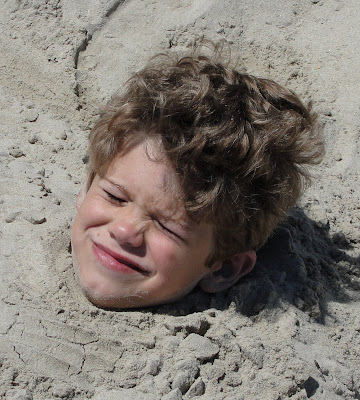 Heads in the sand. What could be more fun than that. The day wasn't a total waste. The kids had fun. I was a little embarrassed for suggesting such a jellyfish infested beach (Yes Brook, you did warn me). Is there a jellyfish season? They just weren't there last week. When will they be gone?
Posted by Rachele Bennett at 7:22 AM