I purchased this Tie-Dye kit several months ago on sale at Target. I thought it would be fun for a rainy day project with the kids. We broke it out on Thursday and got our creative juices flowing. The results (at least from the kids) were fantastic. I really like that everything except the t-shirts are included. I also like the precision the bottles allow for over dunking in buckets of dye. It also provides less clean up. 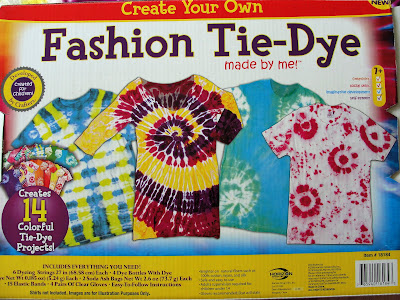 We chose to use two of the four included dyes. We'll save the other two for another rainy day. Purple and yellow were the colors the kids decided on. I asked them what type of design they wanted and they both wanted "targets". Handsome wanted three and Puddin Pop wanted two. I twisted and banded the shirts and then set them loose with the dye bottles.

Handsome (through some convincing) determined that less was better. I didn't want him to use all the dye before his sister and I got a chance. His shirt came out looking like this... 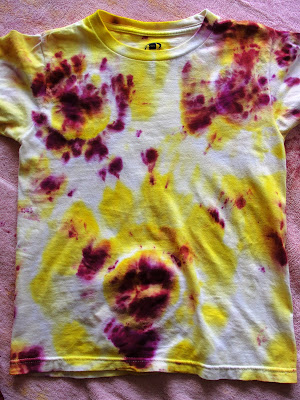 I think it's pretty cool. He probably could have used a little more color as we didn't run out, but I like the way it turned out. More importantly, HE likes the way it turned out.
Puddin Pop had a different method and wouldn't stop until she could find no white spots in her pile of shirt. I think she's onto something. Her shirt turned out like this... 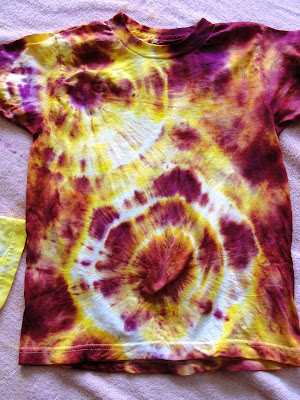 Not bad for 4. She is also thrilled with her project which make me happy.
I tried to do a shirt like the one on the left side of the box. The blue and yellow one. Apparently I folded the shirt wrong because the one I made for Hubster (that I'm sure he'll never wear) turned out like this... 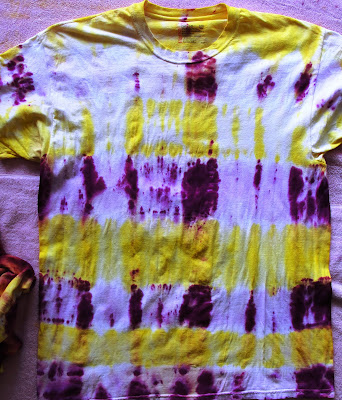 Who knew you could do Rugby Tie-Dyes?
The project was a success and we have enough dye left over for 2-4 more rounds. Very little mess and minimal clean-up make this a project I can't wait to do again. The box says it can make up to 14 shirts. If made like Handsome's I believe it would. If made like Puddin Pop's you might get 6. This would be a great play date project or for a sleepover. It suggests letting the shirts sit banded for 12 hours, we are not patient people and rinsed after 4. I think that was a fine amount of time as the shirts do not look faded at all.
What do you like to do for rainy day fun?

Posted by Rachele Bennett at 1:10 PM