I invented Kettle Corn but let my brother take the credit. 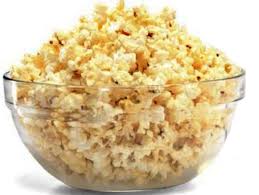 Why do kids lie?  Is it embarrassment?  Fear of punishment?  Something they learn from their parents, siblings or peers?  Is something they are "born with"?

I remember lying as a kid and the two most memorable both involve popcorn.  That's weird, isn't it?

In fourth grade we were having some sort of party and while the teacher was out of the room some of us were throwing popcorn into the air in an attempt to catch it in our mouths.  When the teacher came back and asked who was involved I immediately denied being a part of it.  It was foolish, looking back, all my friends were there and witnesses.  I wasn't trying to get them to believe me.  I feared what would happen if the teacher found out.  What most of the other kids didn't know was that earlier that year on a class trip with that same teacher, I had been pulled aside and questioned about a situation that had happened and when I responded the teacher had smacked me across the face.  This wasn't allowed, even back then, she was an adult.  Who was going to believe me? I should have just run off and hidden at Le Touessrok, but I was 10 and transportation would have been a challenge.    I never told anyone.  Not even my parents. (One of the other parents on the trip saw the whole thing and ended up calling my mom.  Even in front of my parents and the Principal the teacher denied it ever happened).  So I lied.  I Had all my friends resent me for doing so, but saved myself from being slapped again.

The situation at home was similar.  My mom would fly off the handle at the simplest of things.  We would here her scream something like "God Dammit.  Who ate the last Twinkie?" and we would all run for cover.  We would also all deny that it was us.

One morning at breakfast, as I was putting sugar on my cereal, I decided it would also be fun, and harmless, to add a scoop to the leftover popcorn on the table (thus inventing the sweet taste of kettle corn).  It wasn't an intentional ploy.  I really never thought of it as anything than wasting an extra spoonful of sugar.  No one ever ate the leftover popcorn.  Then my mom came down and sat with us.  She reached over and grabbed a handful of that sweet creation of mine.  She immediately spit it out and went into fury mode. "Who the hell put sugar in the popcorn?"  All 3 of us answered in unison "Wasn't me."

The usual ritual took place.  We were all immediately grounded from whatever activity we were currently participating in.  We were sent to our rooms to "think about it", and then we would all be called down for questioning.  Individually.  Usually during questioning one of us would fess up, usually my older brother or myself.  We would remain grounded but the others would be set free.  On this particular day, though, I didn't feel like losing my privileges (I can only guess because I can't think of a better reason of why I continued my lie).  During my questioning I remained firm in my denial.  I wasn't giving in.  After what seemed like hours of interrogations we were all brought together and informed that "one of us" had something to say.  My younger brother stood up and apologized to our older brother and myself.  He admitted that he was the one who put sugar in the popcorn and he was sorry he didn't tell the truth sooner.  WHAT?  Then something else happened that may have caused me to continue lying in these same sorts of situations.  My mother announced that since he was so brave in telling the truth he would not be grounded or have any privileges taken away.  You can see where I'm going with this.  I have a brother who, under pressure, will confess to anything and he won't get in any trouble for it (which means I don't have to feel guilty).

I try to remember these situations and how I felt when dealing with my own kids lies.  I assess whether I over reacted, whether they fear the punishment, are too embarrassed to tell, or are still working on good judgement and don't want to disappoint.  I want them to be able to come to me, no matter what, and know that I am on their side.  I will not play them against each other and hope they know that they never have to lie to me, or at least figure it out soon.
Posted by Rachele Bennett at 1:29 PM