We finally had a weekend full of nice weather.

Puddin Pop had some friends over on Friday and it was nice enough for the girls to play outside.  I set up the bouncy for them and they spent the most part of 3 hours in it and riding bikes, scooters and plasma cars.  The only problem was the wind.  The older two girls were having more fun inflating and deflating the bouncy so they could be in it while it "blew up".  I don't get this, but it seems to be what all the older kids like best... when they are not making silly faces in the netting. 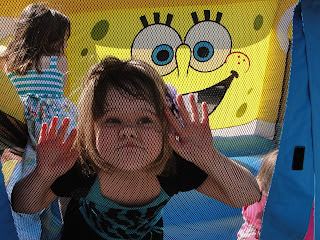 At one point PP was in it alone and a huge wind gust came by and flipped the whole thing over.  I watched, in slow motion, as the blower was launched into the air and was following behind, because it's attached.  Luckily it didn't hit her or the bouncy but that was enough for me to pack the whole thing away.

On Saturday the kids played with the neighbor girl.  At one point they decided the dog kennel would be a fun place to play.  If I was a person who plays bingo online this surely would have come in handy for a place to store them and keep them from distracting me.  As it was, they decided they were hamsters and required water and food.  I'll also add that the neighbors parents stood next to me and watched.  It's amazing what kids find fun. 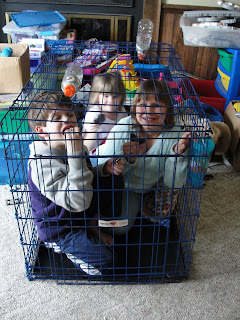 You can see the water bottle on the top.  Just like hamsters, right?  They stayed in there for almost an hour.

We had a little wine (the mom's) and pizza and ended the evening with a special treat... 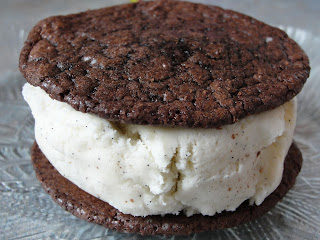 I had made the cookies to make soft oreos and made a couple of those before I came up with this idea.

It was a really good idea.

Sunday the kids and I played around the house most the day.  Last night I, with the help of some friends, live-blogged the Red Carpet and Oscars.  I need to get out more.  I had no idea who a lot of the actors were.  We talked trash about dresses and facial hair and I stayed up way too late.

How did you spend your weekend?
Posted by Rachele Bennett at 7:37 AM