My Friend is Addicted to Zuma Blitz 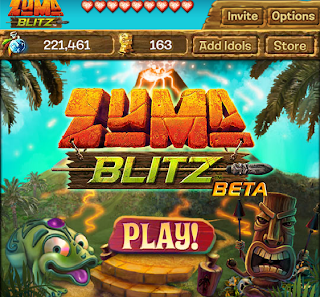 Last week Puddin Pop had a friend over. We'll call her "B". They were playing and I was doing some very important work on my laptop (Facebook).  PP's friend came over to see what I was doing and caught me playing Zuma Blitz.

Later that day I'm telling B's mom about our conversation and we're both laughing.  She says "Can't you just let me win once?"  um. NO.

But I never win either.  There's a weekly tournament where you try to beat all your friends.  On HER list I always show as 1st place but on my list (because we have different friends) I'm always 2nd.  There's a woman who I don't know IRL who ALWAYS beats me... and by a LOT.

Yesterday I had a thought.  If I just un-friend this woman I don't even know then I will always win.  Nice thought.  Then I went in to kill a couple minutes and saw that B's mom had beat my weekly high score.  I'm a little competitive so this was unacceptable.  I loaded up on powers and set out to beat her.  You know what happened?  I posted my Highest. Score. Ever.  I even beat the woman I was thinking of un-friending.  That felt awesome.  Better than winning because she was no longer my "friend".

So.  If you play FB games, Would you un-friend someone so you could WIN?
Posted by Rachele Bennett at 7:48 AM