I'm so excited for Summer programming to begin.  In the past couple years some good shows have come out that only air during the Summer.  I don't remember this type of programming when I was a kid, or even 10 years ago, but it gives me something to look forward to when the other shows go on break and my DVR gets empty.

The Closer is one of my favorites.  I've watched since the first season and haven't missed a show (Gotta LOVE DVR's).  Brenda Johnson (Kyra Sedgwick) is a tough but soft Deputy Chief that always gets her "guy".  The ability to pretend to understand where the suspect is coming from in whatever crime (murder) they've committed makes her the person you want on the job to get justice.  The entire cast is awesome and it's a team like no other.  We also get a glimpse into their personal lives and see how the job affects it.

I've been hooked since the beginning and look forward to Summer to check in and see what The Closer is up to next.

Does that clip have you intrigued?  Of course it does!
Pre-order your copy of The Closer: The Complete Sixth Season on DVD today!

Order all 6 Seasons if you've missed one! 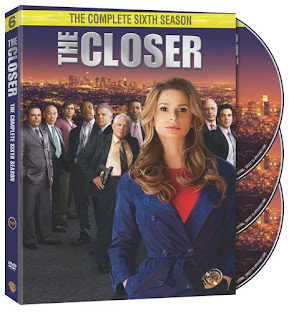 Are you already a fan?﻿  Tell me about your favorite character or episode.
**I have been hired by Warner Bros. WBWord division to promote The Closer Sixth Season on DVD.
Posted by Rachele Bennett at 7:47 AM