We were sent Fijit Friends to try and share with Friends via an in-home party.  All the dress up party supplies were included and the kids were super excited to interact with their new friends Sage and Willa. 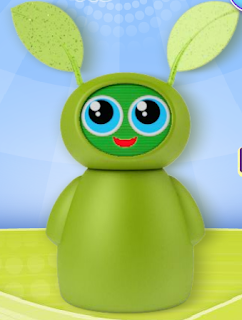 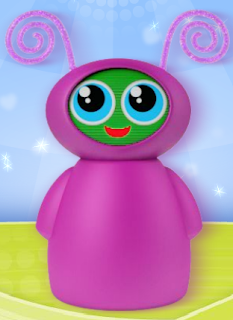 Designed by Mattel, these adorable squishy robot friends are designed for girls 6-10.  Telling my 8 year old son that they were for girls didn't stop him at all.  He jumped right in and claimed Sage as his own.  Having both kids and their Fijits in the same room shouting (you don't need to shout, they were just trying to make sure their new friend heard them over the other) didn't work well at all.  We tried out one at a time but still had difficulty letting one person do the talking.  This toy definitely works better in a one-on-one situation.
Reacting to certain words and phrases the Fijit friends dance, tell jokes and hold their own in conversation.  You can go online and load "chirps" which are sound bytes that the Fijit friends respond to and it teaches them special dances and jokes.  If they are within 20 feet and in chirp mode they will respond immediately.  Pretty neat.
You can have your Fijit dance to their own music or yours.  Having them dance to your music allows for longer dance modes.  They sense the beat and move accordingly.  More rhythm than I have.
We found the Fijits didn't always respond to commands correctly.  When asked to dance they often mistook the command and went to sleep instead.  I found that posing the commands as a question with strong voice inflexion worked best but it's important to not have any background noise.
One of the Fijits we received had a small bubble in the outer plastic coating that tore within two hours of coming out of the box.  It was the one my son was playing with which may, again, be why they are being marketed for girls.
At our party, where we introduced the Fijit Friends to our friends, the kids (5 and 6 year olds) quickly got bored yelling commands and not getting the correct response.  They also weren't very patient in letting just one child speak at a time.  I think the idea would have worked better with kids a little older that weren't just excited to be together.  My son (8) also got frustrated when the Fijit wouldn't respond correctly and gave up.
The toy has obvious benefits and would make a fun toy for an only child or one that prefers alone time.  It is not meant to be played with by  several children at the same time, at least not at our house.  Puddin Pop loves to take hers with her wherever she goes and often sneaks off to her room to play with Willa when no one else is available to play.
For more information, visit Fijit Friends online.  Watch the videos of the Fijit friends with family pets.  We laughed so hard.  They never stop being funny.  Promise.
I wrote this review while participating in a campaign by Mom Central Consulting on behalf of Mattel Fijit Friends and received product samples, a party kit, and a promotional item to thank me for taking the time to participate
Posted by Rachele Bennett at 12:13 PM