Before you get rid of that Train Table, Read This.

If you have a little boy, you more than likely have trains.  You may even be fortunate enough to have a train table for him to play on.  Or your little girl may love trains.  Either way, this may be helpful.

My son LOVED anything with wheels.  Cars, Trucks, and Trains always made him light up.  A friend of mine was getting rid of her sons' train table as she felt they had outgrown it.  I bet she's banging her head against the wall right now.  I purchased it as a reasonable price and gave it to our son for his 2nd (or 3rd) Christmas.  He spent hours setting up his new train track and rolling the trains through all the loops.  He eventually moved away from trains and it sat unused in our den.

It later got recycled as a platform (with plywood on top) for a 75 gallon fish tank that Handsome had in his room.  This is what you end up with when the State Fair goldfish dies and you have a husband who doesn't understand what moderation is.

When the Fish tank became boring and too much work, the fish were sold and the tank removed.  Now we had an almost 8 year old with a train table in his room.  I can hear you gasp.  He was quite mortified too.  We had talked about removing it and then I had an even better idea.  It happens every once in a while.

What do little boys (and girls too) transition into after trains, cars and trucks?  You know what I'm talking about.  Those colored blocks that hurt like a son-of-a-gun when stepped on barefoot.  Yep.  Legos.  We have tons and tons of Legos.  How do we contain them all?  What about those super deep drawers that pull out from either side on the train table?

And so it was done. 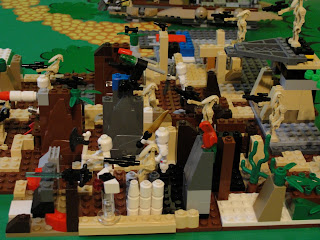 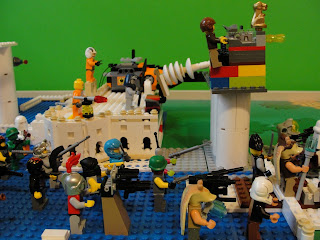 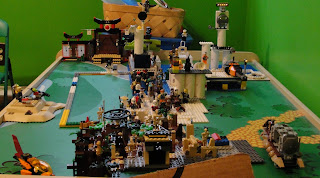 This is the scene Handsome is currently working on.  He loves to free-build and set up "attack" scenes.

He will disappear for an hour or more at a time and just add to his creations.  All his Legos are in his room.  He can leave them set up for later or take it down and start over.

Can't remember the last time I stepped on a Lego piece.  That'll make you smile if it's ever happened to you.
Posted by Rachele Bennett at 2:22 PM