We were recently sent some Pinypons to play with and share with our friends.  Our party had to be delayed due to Puddin Pop getting strep but... She has surely enjoyed playing with them and the Pinypon Caravan.  Definitely not made for littles, as the pieces are super tiny, but for my 6 year old, Hours. of. Fun 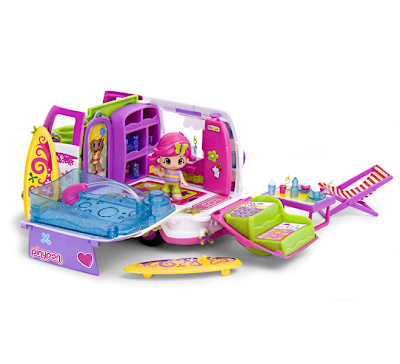 The shower really pumps through water and the possibilities of decorating the caravan and setting up mini parties for her Pinypons has been her favorite activity.

Pinypons are miniature figures that are detachable and interchangeable.  From their hair to their accessories, the creative child can come up with tons of figures, personalizing each one.  The heads are also 2 sided with different expressions on each side.

At Pinypon.com, kids can create their own Pinypon.  There are not as many choices are there are with the figures, but seeing it onscreen and having it emailed is another activity PP enjoyed.  Here is the Pinypon she created...

The site also offers games and puzzles.  PP really enjoyed playing when she became too tired from Strep to get off the couch.  It was fun to snuggle up and play together,

I think this Shopping Mall might end up coming from Santa this year... 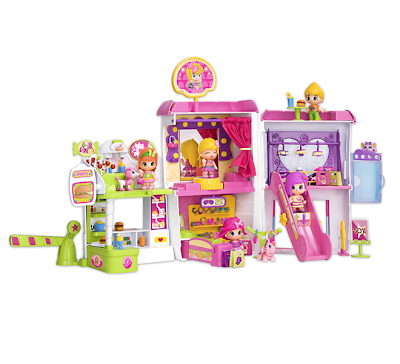 Imagine the hours of fun we can have with it.

Ultimately, Pinypons are a creative toy that can be used in a variety of ways, uses imagination, and gets kids back to playing rather than sitting in front of a game screen.  We give them 2 thumbs up!


**We received our Pinypons for review from MommyParties and Pinypon.  No money influenced our opinions.
Posted by Rachele Bennett at 6:20 AM 6 comments: