O.M.G.
Sometimes you have a craving for something and you have to have it NOW.
Sometimes you get lucky enough to have 80% of the ingredients on hand.  Enough to make it "close enough."
This is a recipe about one of those times. 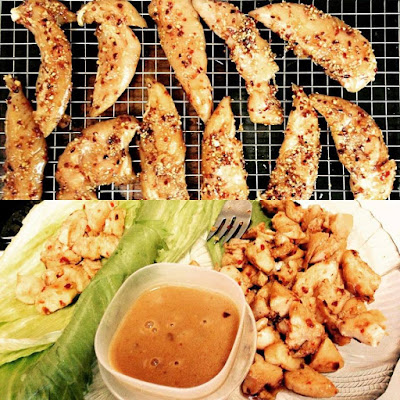 I was craving some Chicken lettuce wraps, or maybe just trying to figure out what to do with the head of lettuce in my fridge that didn't involve a salad.  I didn't have the veggies (carrots or water chestnuts) that normally go in this recipe, Hell, I didn't even have a recipe.  But I threw some shit together and the result was amazing enough to share.  That's a Win!  It's also a win because I think, after 30 years, my dad is now convinced I can do something other than Boil-in-a-Bag meals.  It's a joke we share, and one I am always striving to prove him wrong on.

What you'll need:
Chicken.  I used tenderloins, but you could use breasts as well.  Whatever is on hand
Teriyaki sauce.  Enough to marinade chicken.
Lettuce.  Peel off as many leaves as you need
Peanut butter 1/2C.  I used creamy, but crunchy works too
Garlic.  Fresh or dried or minced.  I used dried roasted garlic.  It's my favorite
Crushed red pepper.  Enough to season chicken and for Peanut sauce.  As much as you can handle, in      my opinion.
Soy sauce.  1 tbsp for peanut sauce
Sugar.  1 tsp
Water

I marinated the chicken for 2 hours in Teryaki, Garlic and Red Pepper.
After two hours I put them on a cooling rack on a baking sheet.
I'm a little disappointed that this is the first time I thought to do this.  The baking rack as a kind of grill in the oven.  I'm surprised I've never been told of this technique, or seen it on Pinterest.  I am now claiming that it is my own unique idea and sharing... and taking Full Credit for inventing it.  You are Welcome.
I poured the extra marinade over the top and baked 10 tenderloins at 350 for 20 minutes.
While that was going on, I put the peanut butter and soy sauce in a small sauce pan on LOW.  It's very important not to burn these as it ruins the flavor.  Trust Me.
As it slowly melts, add a tsp of garlic, the sugar and more crushed red pepper (as much as you can handle) and mix it well together.  The soy sauce and Peanut butter seem to separate, but it will be okay.  Add water to desired thickness.  I used about 3/4 cup.  Continue stirring until it's creamy and remove from heat.
Pour a glass of wine and wait for chicken to finish
After 20 minutes, take chicken from oven and let cool for 10-15 minutes or until it's time to pour another glass of wine.

Cut chicken into small pieces, add a little of the peanut sauce and mix well.

I sure did.
Posted by Rachele Bennett at 10:40 AM No comments:

I could have killed someone. Thankfully, I didn't

While coming back from Handsome's school the other day, we were driving down a 5 lane road, that, in most instances, is steady traffic.  The speed limit is 45, and average speed is 50.  People swerve in and out of the 5 lanes to get the best position, or to get in the right lane to make turns or u-turns,  I drive this road every day to work.  In the 3 miles it takes to get there, I always witness people texting, driving way over the speed limit, following too close, and idiots trying to cross the road in the middle, rather than walk to the cross walk,  It's 5 lanes in each direction.  I've seen pedestrians hit for making this stupid choice.  I am always watching out for anything.  Especially when I have precious cargo,
So, we are heading home.  We are in the second lane from the right, and I notice a man on a scooter coming out of a shopping center on the right.  I start to slow, not knowing which lane he is going to turn into.  My Dad  always taught me to be an defensive driver and be mindful of all possible situations.  Thanks, Dad.  He makes it to the first lane and gets his duffle bag caught under his wheels.  He tries to drive over it and at this point I am almost at a stop.  The scooter takes off over the bag, dragging the man with it.  They spin out and stop on the ground less than 5 feet from the front of my car, which is now completely stopped.  I am lucky no one was directly behind me to ram into me.  So is the guy on the scooter.  As we sit there watching, the kids and I, the man picks up the bike and, in frustration, slams his helmet to the ground, which then travels to the next lane,  It sits there for about 30 seconds before another car comes, runs it over, and drags it a hundred yards down the street.  The man is just standing in front of us, cussing out the car and throwing this tantrum. I could have gone around him, but I didn't.
I took the opportunity to tell my kids how differently this could have turned out.  I never text while driving and rarely even talk on my phone while in the car,  I could have been preoccupied if the kids had been bickering, or acting up in the way kids do.  So many things could have gone wrong.  I could not have been paying attention when he first came out, I could have assumed that I had the right to my lane and never slowed to begin with.
I stayed where I was.  I stayed because I was afraid for this man if I moved.  Afraid another distracted driver would not be aware of him in the middle of the road.  He never even acknowledged we were there, 5 feet away from him, for more than 5 minutes.

Please be aware of other drivers.  Put your phone down.  It's really not that important.  Please be a defensive driver and focus all your attention on what's going on around you.  Please get there safe!
Posted by Rachele Bennett at 10:06 AM 1 comment: