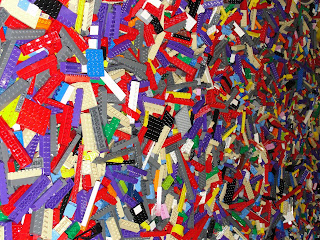 I know you are going to have a blast.  There are so many neat things to do and see.

Tickets are going fast and are expected to sell out for BOTH Saturday sessions.  You can still get $2 off tickets by using the link below.

(Coupon is good through January 31st.)

We are looking forward to going on Saturday.  We can't wait to see what new stuff the Master Builders have come up with. 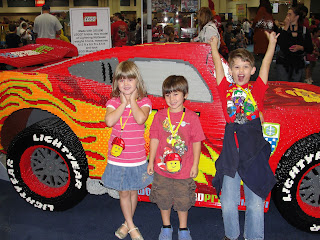 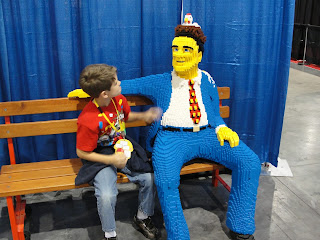 Leave me a comment if you plan on attending and maybe we can meet up.

It's something everyone should do... at least once.
Posted by Rachele Bennett at 7:03 AM 1 comment:

Yesterday was one of those days that remind you of what is MOST important.  It was an awful morning but one, I think after a long period of reflecting, will make me a better Mom.

It started off wonderfully.  First day since Winter Break that I didn't have to drag the kids out of bed.  Handsome came downstairs at 6:50 and Puddin Pop came down 20 minutes later.  With their clothes laid out and breakfast in front of them, I went to take a shower.

As I was stepping out of the shower, PP informs me that Handsome had stepped on some glass and it was still in his foot.  We cleaned the blood and determined that the glass was sticking out of his heel and would be easy to remove with tweezers.  He wanted to do it himself.  I thought that was a great idea.  We had 40 minutes until we needed to leave.  They were both fed and dressed.

I went about packing lunches and after 15 minutes, went to check on him.  He was still sitting in the bathroom, tying to summon the courage to take it out.  I offered to help.  I was denied.  I went on with my morning routine.

Another 5 minutes goes by and I start panicking.  We have 20 minutes to get out the door and the glass is still in the heel of his foot.  "I promise I'll be gentle."  "It won't hurt."  "I'll give you $5 if you let me try."  That's where we started, we ended in a much worse place.  Every time he told me I could do it, he would push my hand away.  I tried to convince him to look away, but he was having no part of that.

As our leaving time approached  I went MAD.  I told him how important it was for me to be on time to work.  How my being late affected other people.  How we'd be homeless if I got fired (not a proud moment).  I ranted for, at least, 5 minutes.  PP started crying about being homeless, Handsome was crying because he just didn't know what to do, and I just conceded.

It was in that moment that I realized 2 things...

1.  I was doing it all wrong, and
2. While my job IS important, it is not MORE important than these precious children.

That was not the message I was sending.

It was now 10 minutes past when we were supposed to leave.  I was not at work, where I should have been.  I was not on a conference call that I was supposed to be on.  As hard as it was, I thought... SO WHAT?

I would NOT get fired for being late. I knew that.  For me, though, putting my responsibilities on someone else, is the worst thing EVER.

I sent a text to my PIC (partner in crime) and told him I would be late and couldn't get on the call.  He texted back, "No Problem."

... and so I sat.  Sat down on the floor right outside the bathroom.  Puddin Pop climbed in my lap, we were 2 feet from Handsome.  I apologized for making them believe we'd be homeless.  I explained that, no matter what, I would make sure we never became homeless.  That I should have never said that and that I was sorry.  I said sorry, a lot.

I told Handsome to take as much time as he wanted.  I would be happy to help, when he was ready, and until then, I would wait.  Shit Happens.  As hard as it is for me to relinquish control to that.  I had no choice.

I believe, in a similar situation, I will get that a lot quicker and make much better decisions.

It took about 5 minutes.  We all calmed down.  Handsome handed me the tweezers and .02 seconds later it was done.

Kids made  it to school on time.

I was 30 minutes late to work.

I work with AMAZING folks who WILL cover for me.  I need to remember that too.

We've been waiting for it to come close to us again

It will be here in February and WE CAN'T WAIT!

You can check out our photos from last time RIGHT HERE

We had a BLAST.

I was so excited to go that I left work early and took the kids out of school 30 minutes early just so we could get to Raleigh where my brother lives.  We weren't going until the next morning, but we NEEDED to get there.

See how excited the kids were bright and early the next morning? 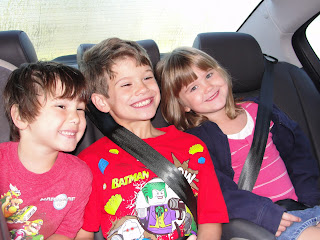 There are so many things to DO and even more stuff to see.  I'm pretty sure Handsome has "Master Builder" on his list of things he wants to do when he grows up.  Who wouldn't?  He also has the insight and design skills to reach that goal.  I think we also have enough Lego bricks to give him a head start.

If you are looking into going, and you should, USFamily Guide is offering a coupon for $2 off each ticket purchased before January 31st.  You can get that here...

You can also WIN 2 FREE tickets by entering My Giveaway here..

Winners will be chosen by USFG on January 18th and contacted by email.

If you have a child interested in Lego, or are interested yourself, you DO NOT want to miss this.